The much anticipated — particularly in the astrology community — Jupiter-Saturn Great Conjunction happened on December 21st, 2020. Jupiter-Saturn Great Conjunctions occur every 20 years but 2020’s was a virtual once-in-a-lifetime event when all the astronomical arrangements are taken into consideration. With that in consideration it was prime time for high ritual; ritual to effect some high magicians’ intentions for the Age of Aquarius, that is expected to resonate for the next two thousand years.

Monday Night Football was the only professional sports event on show on Conjunction night December 21st 2021, so this more than any other sports event is the prime example of how relevant astrology can be to decoding sports event, especially since this went beyond football or sports in general, but was a night of epic ritual at a time – during the corona virus phenomenon – of unprecedented radical global change.

Because the event centered on the Jupiter-Saturn conjunction, the obvious place to start decoding the Monday Night Football game between the Cincinnati Bengals and Pittsburgh Steelers from an astrological stand point would be those two planets: Jupiter and Saturn.

But the context of the radical change occurring globally and some of the primary forces behind that radical change is needed. The Jesuit Order and the Vatican are a major force or the major force as has been covered extensively in the work of Zachary K Hubbard. With that in mind we know that Cincinnati was chosen because of its strong Jesuit roots; and the fact that it shares the same moniker as the Vatican: The City of Seven Hills.

I have illustrated extensively that the true object of the Order’s veneration is the Roman god Jupiter the chief deity of Rome – and of Ancient Greece in the form of Zeus – represented by St. Peter.

So in this case the event was centered around the planet Jupiter: The night of the Jupiter-Saturn conjunction, in a Jesuit city; Jupiter being the favored planet of the Jesuits.

Jupiter rules the zodiac signs of Sagittarius and Pisces.

It is not a coincidence that the first openly Jesuit Pope is a Sagittarius, and the Mitre “fish hat” is a Pisces symbol worn by the Pope and Cardinals.

A symbol of Jupiter the orange striped planet, is the Tiger. The Cincinnati Bengals are then instantly recognizable as a Jupiter symbol.

In the absence of superstar rookie quarterback Joe Burrow – who attended LSU Tigers in college and is a Sagittarius, (and the Bollywood Indian movie “Bengal Tiger” was released on his birthday) who would be the star of the masquerade? There were several candidates but the most likely was Bengals veteran Running Back Giovanni Bernard who is a Sagittarius and has a Catholic background. His birthday of November 22nd is related to the Great Conjunction since U.S. Presidents elected in Great Conjunction years have died in office or survived assassination attempts; the most famous of which is JFK on November 22nd, Giovani Bernard’s birthday.

November 22nd, 2020 was the also the date that Joe Burrow was eliminated from the grand ritual game with a season ending injury, handing the starring role to Bernard.

Giovani is an Italian name. “Jupiter” in Italian is “GIOVE.” The adjective pertaining to Jupiter is “JOVIAN.” The Italian translation is “GIOVANI.”

The Roman god Jupiter is actually a mere analog of the original archetype: the Sumerian storm god ENLIL. the Babylonian version of Enlil is “ELIL” which also sums to 25.

Any doubt that the NFL and media higherups are consciously aware of the astrological and ritualistic nature of events like this are erased when you consider what ESPN Monday Night Football’s lead commentator Steve Levy announced to the audience shortly before half-time:

With 4:20 left in the second quarter Steve Levy had declared:

“Three Pittsburgh turnovers tonight leading to 17 Cincinnati points. I mean, you would think that the planets would have to be aligned for the Cincinnati Bengals to have this kind of effort against the Pittsburgh Steelers tonight.”

Absolutely no doubt about the consciousness of the astrological ritual.

With that level of ritual awareness I suspected that Steve Levy himself must have been part of the grand Jovian ritual. Sure enough Steve Levy – born March 12th – is a Pisces.

Monday Night Football has four announcers: three in the broadcast booth and one field reporter on the touchline.

This is what I call a PISCES GRAND SLAM!

Opposing the Bengals was Pittsburgh Steelers Quarter Back Ben Roethliberger who is also a Pisces.

MNF Commentary Crew Is Not Randomly Put Together

The MNF commentary crew is Steve Levy, Brian Griese, Louis Riddick and Lisa Salters; a gematria matchup as well as a broadcast-crew match up.

“Steve Levy” and “Lisa Salters” have double overlap most significantly at 36.

Coming into the December 21st Conjunction game Giovani Bernard, a veteran in his 8th season and no longer a feature Back, had scored just two rushing touchdowns and two receiving touchdowns in 13 games.

Bernard’s 97 yards total offense for the game hits on a key ritual number.

Giovani Bernard attended St. Thomas Aquinas High School, a private Roman Catholic school in Fort Lauderdale, Florida. It is sponsored by the Roman Catholic Archdiocese of Miami and is the largest Catholic High School by enrollment in the United States.

Its patron saint is Thomas Aquinas whose birthday is not officially publicized but whose death day is in Pisces: March 7th.

Giovani Bernard’s name brings more to the ritual table: his last name is shared with 6 Catholic saints, the most significant of which is Saint Bernard of Clairvaux who is the founder of the esoteric order of The Knights Templar who have influenced Freemasonry and the Jesuit Order. The Jesuit Order’s military wing The order of Malta shares the Knights Templar Red Cross symbol: the Malta Cross or the Templar cross (below).

174 is hugely significant asa a gematria value of “CINCINNATI” the Jesuit founded city.

St. Bernard of Clairvaux is venerated on August 20th; his feast day.

From 2020’s Feast of St. Bernard of Clairvaux, August 20th to the Great Conjunction and Giovani Bernard’s heroics is 17 weeks, 4 days like 174.

When you spell out “ONE HUNDRED SEVENTY FOUR” in the latin cipher (“Jewish” on the gematrinator calculator) it sums to 2112, like the date of the Great Conjunction.

174 is one of the most significant numbers to this ritual/synchronicity.

The Knights Templar were known as “WARRIOR MONKS.” This sums to 174.

The Great Conjunction symbolically ushers in “THE AGE OF AQUARIUS” which sums to 174.

The famous running Back in Cincinnati Bengals history is Pisces Ickey Woods, real name “ELBERT L WOODS” which sums to 174.

Jupiter 99, The Tiger and the Lightning Bolt Symbols

The most commonly used gematria value of “JUPITER” is 99 (Simple/Ordinal).

A symbol for Jupiter, the storm planet – and Jupiter the Roman King of the Gods – is the lightning bolt. The striped tiger is a symbol of the striped planet Jupiter. A National Football League team with the Jovian lightning bolt symbol is the Los Angeles Chargers. The Cincinnati Bengals hosted the Chargers in the opening week of the 2020-21 season in a ritual homage to Jupiter. The game was played on September 13th.

September 13th is an enormously significant date pertaining to a Jovian ritual. The Roman Temple to Jupiter, the chief deity and god of gods, was located on the most sacred of Roman sites: Capitoline Hill.

Jupiter was worshiped there as an individual deity, and with Juno and Minerva as part of the Capitoline Triad. The building was supposedly begun by king Tarquinius Priscus, completed by the last king (Tarquinius Superbus) and inaugurated in the early days of the Roman Republic (September 13, 509 BC). 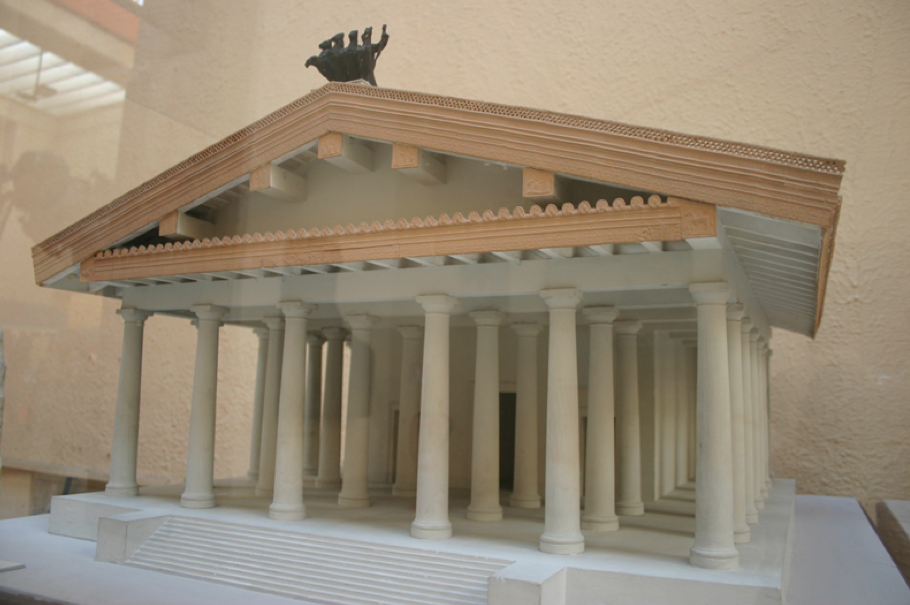 The Jovian symboled Bengals and Chargers met – in a Great Conjunction year – on the anniversary of the inauguration of the Temple of the Capitoline Jupiter, exactly 99 days before the Great Conjunction and the Monday Night Football game in Cincinnati.

Besides the striped tiger being a symbol for Jupiter the striped planet, and the lightning bolt being a symbol for the god Jupiter, the eagle is a representation of Jupiter; the most salient and vivid Jovian symbol of all. Three national Football League teams have Jovian logos: the Bengals, Chargers and the Philadelphia Eagles.

Yet another Jovian ritual was observed in the NFL in 2020 when the Philadelphia Eagles hosted the Cincinnati Bengals. Since Jupiter is being elevated and worshipped in this game, he cannot be allowed to lose. So the game ended in a tie (23-23). 23+23 = 46 like the gematria of “SAINT PETER” and “CATHOLIC.” The second catholic President of the united States is the 46th. The first catholic President of the United States JFK died at age 46.

The upcoming NFL season will open on Thursday September 9th. This is a significant Jovian date because Thursday is the day of the week dedicated to Jupiter, and the date is written 9-9 like the key gematria value of “JUPITER”: 99.

Those familiar with Cincinnati sports history will remember “St. Bernard” in a different context: the last time the Cincinnati Reds baseball team won the World Series was in 1990 when they were owned by Marge Schott.

Marge Schott became the first woman to buy a major league team when she purchased a controlling interest on December 21st, 1984.

The Reds won the World Series despite Schott’s leadership not because of it. She is generally considered to be one of the worst professional sports team owners in American history.

Marge Schott demanded that her St. Bernard appear in every official team photograph and media guide

Schott allowed her St. Bernard to defecate and urinate on the astroturf field before games and – in one notorious incident – made the General Manager Bob Quinn clean up after Schottzie soiled his office.

Major League Baseball eventually forced her out of the league due to multiple incidents of overt racism including declarations of support for Adolf Hitler. Of course she sold the team on Hitler’s birthday.

Schott is also said to have worn a Nazi Swastika arm band. The Nazi Party used multiple symbols of Jupiter:

The most prominent Jovia symbol the Eagle

The lightning bolts were used as a logo for the SS paramilitary.

The oak leaf – most commonly displayed on Nazi officers’ lapels – invokes Roman Jupiter whose symbol is the oak tree.

Nazi symbolism which is Jupiter symbolism: the eagle, lightning bolt and oak leaf

Marge Schott died in Pisces; March 2nd which is Ben Roethlisberger’s birthday. Ohio native Roethlisberger was the starting Quarter Back for the Pittsburg Steelers in Cincinnati on Great Conjunction night 2020.

Marge Schott’s funeral was held at All Saints Catholic Church.

“GIOVANI” matches “BERNARD OF CLAIRVAUX” at 112.

This is a relevant number to “CATHOLICISM” which sums to 112.

Vatican City was established as an independent state in 1929 on 11th February; a date written 11–2.

The Society of Jesus (Jesuits) is officially engaged in apostolic ministry in 112 nations. https://en.wikipedia.org/wiki/Society_of_Jesus

Conjunctions are considered the most powerful alignments in astrology. Knowing that a sporting (or other) event will occur during a conjunction can be helpful in predicting some aspects of the event. Stellarium app – not available for Mac – is a helpful tool for this.

Stellarium is a free open source planetarium for your computer. It shows a realistic sky in 3D, just like what you see with the naked eye, binoculars or a telescope. Enter a date present, past or future and it will indicate planetary and stellar positions for that date.

Hello and welcome!  My name is Zachary K. Hubbard and teaching is my passion!  Prior to 2013, I taught in elementary schools, teen homeless shelters and group homes.  It was in that year I discovered Gematria, and since then it has been my mission to help this knowledge reach the world.  Thank you for helping me in that effort!